The statement that resonated most, and which is the fundamental basis of our training is  ‘Character is everything.  Authentic, genuine, deep character.  And, without it, they will find themselves jibbering when the going gets tough (and it does get tough).’

When training, I often refer to the film ‘Coach Carter’ to demonstrate what I mean. Now I realise I could use someone much closer to home!

Mike Harwood is like one of the high performing leaders in our research who has the Liberating Leadership mindset innately and it’s so palpable.

But that’s enough from me. Let’s hear it from the man himself. Take it away, Mike:

‘Leader-Developers…  Essential, but sometimes followers like to stay in that relatively comfortable and safe position. 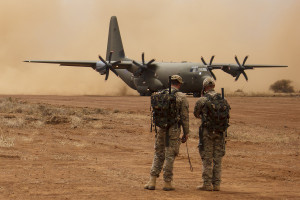 In my first year converting 1(Fighter) Squadron to the Night Attack role, I was the go-to person on pretty well everything (what Ali has called the ‘directing’ style methinks).

My Harrier Force colleagues were remarkably trusting of my guidance, and Headquarters staffs, mostly manned by folk from other aircraft types, soon realised that I didn’t have much time for naysayers who spoke from positions of prejudice (“This can’t be done in a single-seat fighter”).

And I also remember accepting the fact that those early months would involve precious little time to do anything except work, hours and hours and hours of it.  Necessary but unsustainable and the importance of creating credible successors was always clear.  To me at least.

During Year Two, one of the most talented individuals I have ever met, a pilot about 10-15 years younger than me, challenged me for taking my foot off the accelerator pedal and allowing others to take the lead in this and that.

“Why don’t you just tell them what to do?”

“I won’t always be here” I said.  “So I’d rather let them loose now, see what happens, and be there to prevent disaster, hopefully, but also to let them find their own way whilst I’m still close enough to say something quietly, without undermining their confidence.”

He now runs the most innovative company in this country (in my opinion): 2Excel.  And I’d like to think he honed that ‘fire within’ during his time on the Squadron, simply because he wasn’t shackled but neither was he (and the many others) ever forgotten or under-appreciated (either in their value or their vulnerability).

He was ready to lead, to excel, but others were happy to contribute (and be appreciated for that contribution but not with the reward of promotion to positions of responsibility they did not want).

The 4-step process of Liberating Leadership and its ‘Visioning Stage’

As I read the Leader-Developer material and the detail about ‘Visioning’ I thought that we have way too many people leaping into important ‘leadership’ roles before they are ready.

Their ‘vision’ is fashioned from a book that tells them they need one.  But the thing they need more than anything else is to find themselves.

Sounds corny perhaps, but ambition and a desire for higher pay too often propels people into levels of responsibility, accountability and authority that simply stress them out because ‘they get found out for being shallow before too long’.

And that’s where the real ‘personal development’ is required. To explore themselves (the Sun Tzu ‘know thyself’ bit) and to meet people like you, people who are competent enough to take them to the limits of endurance, and possibly beyond, and thereby to ‘build character’.

Character is everything.  Authentic, genuine, deep character.  And, without it, they will find themselves jibbering when the going gets tough (and it does get tough).

To conclude: Lead, Follow, concurrently as well as sequentially.  Surprisingly often, I think back to my week in China in 2012.  I had been explaining ‘adventurous training’ for teenagers and how this developed both character and leadership qualities, including the ability to think for oneself.

I was trying to put across why including adventurous training in a curriculum was important because it developed individuals with the ability to lead even when that was not their primary purpose. For example a co-pilot who has the confidence to say something when the aircraft captain, for whatever reason, seems to be doing something potentially dangerous.

“You want the individual to think for himself…” mused this 70-year-old who resided in the same Province as Confucius, Shandong.  “That might be possible in a country with only 70 or so million souls; it is more problematic in a nation such as ours.”

This helped crystallise questions that have been running through my head for many years. How do we enact this ‘liberating leadership’ (this ’empowerment of individuals’) such that those people don’t take the first opportunity to rush off and start their own businesses?

Must ‘the liberated’ always ‘take charge’ (even if it is only of themselves)?  And are they capable of controlling their own egos so they can also follow rather than simply be ‘top dog’?

It reminds me of that phrase occasionally attributed to Napoleon:

“You are nothing but a nation of shopkeepers”. 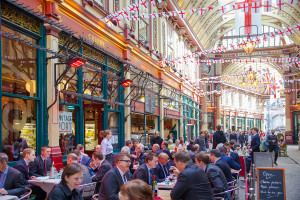 I could believe this to be from that man, as it happens.

But I also think of that quote on another level, and that he was thinking we are nothing more than a collection of small businesses, little shops, hence ‘a little people’…

Every time I look at the breathtaking array of charities in this country, thousands of which seem to be chasing the same theme, I think of this.  Are we capable of ‘visioning’ for ourselves, and perhaps for a few others around us, but never for anything on a huge scale (however you define ‘huge’)?

Are big companies either doomed to fail? Or doomed to contain large numbers of people who are there to draw a wage for a ‘fair’ day of work, but from whom there will be little of the initiative any organisation truly needs if it is to keep succeeding?

I found it fascinating that the RAF, for so long during my career utterly fixated on Leadership, has also produced a book entitled “Followership”.  And I really think that that was a sensible thing to do.

Yes, we must develop leaders, but we must never forget, in parallel, that virtually all of us have someone whom we ‘follow’ in some way.  Even the Pope.

My questions are rhetorical.  I can but hope that those of us who have been leaders will also be prepared to be good followers.  And it is then that we might realise both following and leading require a degree of humility because both require something vital: consent.

And consent, especially consent from a thinking mind, is damn hard to achieve and keep achieving’

It is wonderful to hear from an experienced military leader, who was moved to write this on reading Liberating Leadership. Thank you Mike.

We would love to hear your thoughts on Mike’s comments, because we want to hear from many more eminent leaders in their field.

I’m also delighted we have our own powerful ‘followership’ book coming soon, in the shape of the Pioneering Professional.

Are you ready to make Liberating Leadership your own and attract high paying corporate clients with ease? Pop in your details below.

Get your Free Performance Navigator and learn how to manage your people with ease! Pop in your details below.